What Does it Mean if My Gums Bleed When I Brush? 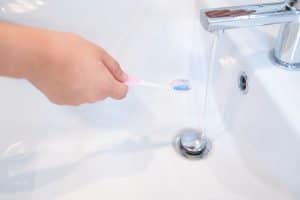 For many people, the first sign of dental problems is a bit of crimson on their toothbrush, or crimson when they spit out toothpaste after brushing.

And, at first, it may seem like a slight problem.

But, in reality, bleeding gums are often one of the first signs of dental issues that need immediate treatment.

At Warner Lakes Dental, we have seen a variety of causes for bleeding gums, some serious some not, but we strongly recommend that if your gums are bleeding when you brush, you give us a call, as soon as possible, so we can take a look and rule out serious problems.

Here, we list the most common reasons your gums are bleeding when you brush.

Symptoms include bleeding gums while brushing and flossing, as well as swollen and tender gums.

Gingivitis is the result of plaque at the gum line not being removed. This plaque is a breeding ground for bacteria that infect the gums and cause bleeding.

The good news is that gingivitis can be halted and turned back before it develops into something worse. The number one defence against gingivitis is nothing more complicated than good, regular brushing and flossing.

A variety of medications can cause havoc with your gums. Blood thinners, as their name suggests, reduce the ability of blood to clot, which means it is easier to bleed in sensitive areas like the gums.

If you suffer from bleeding gums, make sure your dentist is aware of any medications you are taking.

If medication is identified as the source of your bleeding, it is time to work with both your doctor and your dentist to develop a treatment plan.

This is a deceptively simple reason, and one of the few reasons for bleeding gums that might make your dentist smile.

If you’ve never flossed before, or changed your floss or flossing practices, it can lead to minor bleeding of the gums. Give this a few days, and if it doesn’t resolve itself, visit your dentist.

This is very similar to the previous cause. A new toothbrush, or a shift from soft to hard bristles, can cause bleeding. In this case, the bleeding is your gums telling you to back off a bit.

Most dentists recommend soft-bristled toothbrushes to avoid this problem. The problem can also be related to your brushing technique or brushing too hard, so check with your dentist to see if your technique is proper.

Yes, this is real. Pregnancy unleashes a rush of hormones, and this can cause increased blood flow to the gums. This makes the gums particularly vulnerable to bacteria and plaque, leading to gum bleeding and tenderness. As its name suggests, Pregnancy Gingivitis usually stops shortly after birth.

Research shows that even healthy gums can become bleeding gums with only one day off proper oral care. So, keep at that brushing and flossing!

Fruits and veggies, along with nutrients like calcium, vitamins D and C, and magnesium are essential elements of oral health. Make sure you get the daily recommended allowances of your vitamins and minerals.

The bane of modern life, a constant state of stress harms your immune system. This makes it more difficult to fight off all kinds of sicknesses, and bleeding gums and gum disease are among them.

Misaligned teeth can lead to “bite disease,” another potential cause of bleeding gums. If your teeth are misaligned, the wrong type of pressure is applied to the wrong places when you grind your teeth or bite down.

It should come as no surprise that vaping and smoking increase your risk for oral health problems, including bleeding gums.

Tobacco products aren’t good for you in any way, and the only real answer is to stop using them.

The Dental Care Experience in Warner

From parking through treatment, and on to checkout, we make the process as painless and straightforward as possible.

From routine check-ups and cleans to crowns, extractions, and cosmetic treatment, Warner Lakes Dental is your partner in dental health.

We want you and your family to enjoy life with a stunning smile and a healthy mouth, teeth, and gums!

We are located at Warner Lakes Medical Precinct, 1185B Old North Road in Warner.

← Is It Safe to Do Dental Procedures While Pregnant or Breastfeeding? Warner Lakes Dental - Dental Insurance: Use It or Lose It! →